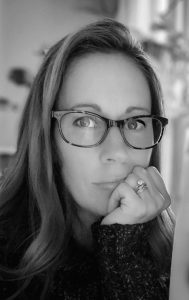 Laura Jackson Roberts is an environmental writer, essayist, and humorist. A lifelong West Virginian, she grew up in Wheeling and attended Eckerd College in St. Petersburg, Florida. After returning to West Virginia, she attended Chatham University in Pittsburgh and received an MFA in Creative Writing.

Laura is a research writer at West Virginia University, where she tells the stories of the many brilliant, dedicated West Virginians working to further the cause of science and humanities, both in the state and beyond. Her stories appear online at WVU Today and in WVU Magazine.

Her essays have appeared in places like Terrain, Brevity, Hippocampus, Still, and Bayou Magazine. Her humor has been published in Defenestration, Halfway Down the Stairs, and Animal, among others. Her humor series, “Roberts Ruminates,”  appeared in Weelunk Magazine from 2016-2020.

Laura serves on the board of West Virginia Writers, Inc, the state’s largest writing organization, and is a member of the Writers Association of Northern Appalachia (WANA). She has also served as an editor for Literary Mama magazine.

Laura lives with her family in northern West Virginia and spends her time traveling, camping, and hiking in the mountains.