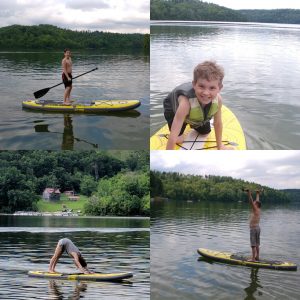 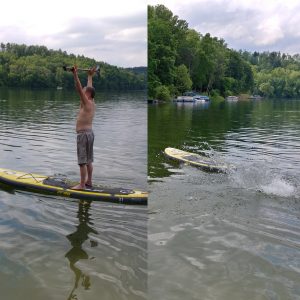 A few weeks ago I had a series of interactions with jerks. A rude man on the phone, an argumentative dental insurance company operator, and a neighbor who gave her handyman permission to drive his truck on our lawn, leaving wet, muddy ruts. Jerks come in threes, I think, like disasters.

On such days, the world feels overstimulating and abrasive, like a cheese grater on my arm. People present their worst selves in clusters, and I want to respond by being a jerk back. A bigger, snappier, more clever jerk, but a jerk nonetheless. An eye for an eye.

But my parents raised me to rise above. Don’t be petty. Don’t be petulant. Do the right thing. Be kind. These are the values we all try to impart upon our children and for good reason. We can’t all be jerks, and we cannot exist as a society if we only exist for ourselves. We need to make an effort to get along, to extend the olive branch often, for the betterment of everyone’s lives. Sometimes, that means swallowing what a jerk dishes out for the sake of moving past the moment.

It’s easy to take that high road to an unhealthy extreme, though. 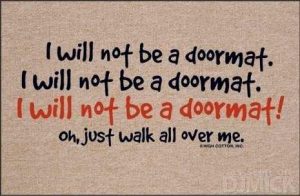 I always take the high road. Always. You can count on me never to start a fight. To play it safe and calm and cool.  And I don’t think that’s necessarily something to brag about. My regular refusal to engage in any sort of confrontation really means I lack spirit. I don’t stand up for myself. I’m not up here trotting along the high road on my moral high horse. No way. I’m here because I’m suffering from elevated levels of door-matitude.

Unfortunately, door-matitude is tricky to overcome because I’ve allowed it to persist for so long. It’s easy to tell myself that I’m doing the mature thing by turning away from a jerk and refusing to engage them. What I’m often doing is letting them off the hook because it’s hard to step up. To further complicate the matter, there’s a distinct difference between solidly standing up for myself and acting like a petty little weasel. Everyone should practice the former, whereas weasels just make trouble. (They steal your keys and hide them under the couch every chance they get.) But as healthy as it would be to practice assertiveness, it would also feel really good to let my petulant inner punk out of the bag.

My friend Thomas once claimed I wasn’t the kind of person who started the fight; I was just the person who ran in at the end and kicked the loser when he or she was on the ground. But he was wrong. I’m nowhere near the fight. I’m the person sitting on the fence, watching, where nobody can accuse me of taking a side or throwing a punch or being anything less than totally neutral. 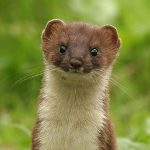 Talk about a weasel. That’s not even neutrality. That’s just wishy-washy.

I don’t know where I got my wishy-washiness, but I have plenty of examples in my family of people who not only stand up for themselves, but also allow themselves the pleasure of a little pettiness, now and again. No one could ever accuse Shawn of being wishy-washy. Recently, we received a notice from our neighbors about our trees. Our yard is bordered by a row of townhouses. The back porches look right into our yards, and the owners routinely tell maintenance workers to their drive big trucks on our lawn without so much as asking our permission. (And that’s the thing: we’d totally say yes if they did.) One worker borrowed a wheelbarrow, trashed it, and drove off without a word. Another broke off a tree branch. 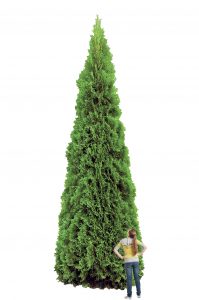 When a cantankerous letter arrived demanding that we remove our pine trees from their view, we declined to do so. We did, however, trim the branches that had grown into their airspace and cleaned up some of the overgrowth. At this point, I’d have been content to let the whole affair fizzle and diffuse. Not Shawn. He wasn’t done, and went out and bought two more baby pine trees, specimens which will grow rapidly to heights of 40 feet and will block the neighbors’ view of our yard. And the sunset. And the sky. He enjoyed every minute of it, and he tends to those trees as he would his children.

How I envy both his carefree ability to say to the jerks, “Screw you guys,” and the smile on his face very time we talk about the baby trees. They hold the sweet promise of years of completely legal neighborly annoyance. I’d have let the neighbors push me around, but Shawn just plants more trees.

Hopefully, Shawn will impart upon our kids the desire to take less crap than their mother does. I want my children to feel confident when they take a position. I want them to know they’re on the side that aligns with their moral compass. Wishy-washiness and door-matitude will never serve them. Not only does fence-sitting show weak moral character, but you also spend a lot of time bent over in the bathroom plucking splinters out of your ass. 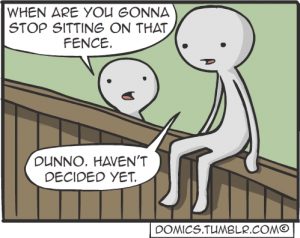 Benjamin has never displayed the attributes of a fence-sitter. He always knows where he stands, and that’s right there in the thick of the fray, brawling for all he’s worth. Andy, on the other hand, takes after his mother. He’s anxious, he’s slow to act, and he’s always worried about doing the right thing.

Recently, Andy’s fourth-grade class spent several weeks participating in the World Peace Games. They divided up into various countries and tribes, and together they worked through crises and learned how a global society functions, for better or for worse. Andy was assigned membership in a small tribe with few members.

He was also secretly given the role of the game saboteur.

I wondered how this would affect him. The saboteur’s job is to ruin things at just the right moment, e.g. poisoning the cattle, introducing disease, and dropping atomic bombs. Timing is everything, and if Andy was found out and convicted in World Peace court, his part of the game would be over. Plenty rode on his ability to be sneaky and snarky and devious, and I wondered if he would find the intestinal fortitude to take it on. Yet he had an enviable job, I’d say. Specifically given permission and instructed to throw a monkey wrench into everything.

I’d love to go back to eighth grade and drop an atomic bomb on the girl who told me my ideas were stupid, and to shut my fat mouth before she smacked it.

For the first week Andy seemed a little hesitant. He made it out like he was waiting for the right moment, but I thought maybe the idea of souring everything felt wrong to him. He had friends in various countries and tribes. He’s a sweet soul who feels uncomfortable when the people he cares about are uncomfortable. In the car after school my desire to live vicariously as a person who not only eschews the fence but blows it up entirely grew stronger each time he told me he was waiting for the right moment to strike.

Waiting for the right moment. I’ve said that many times as a way to justify inaction. When I don’t want to take a side or take a stand, I pull the I’m waiting card. And I worried that Andy might do the same.

And then one Tuesday he got into the car with a fat-cat smile.

“How was school?” I asked him.

“Oh, it was great,” he said. And continued to grin.

“Well,” he said. “The members of my tribe were real jerks today.”

“Yeah. They were so mean. They told me I was going to ruin everything.” He smirked. “So I just decided I would.”

“I poisoned my own tribe’s water.” The smirk turned into a toothy grin as he leaned back against the seat and added, “Some of them burst into tears.”

Apparently, I won’t be plucking splinters out of Andy’s bum after all.