Please visit Weelunk to read my latest in the Valley Views & Varmints series.

This week: Whether you call them fireflies or lightning bugs, they need a little help to flourish. Please give it a read to find out what you can do for them. 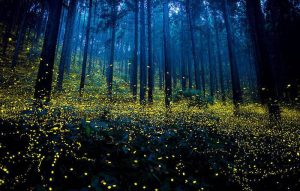 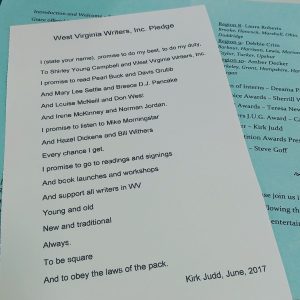 I’ve got a piece up on Vandaleer about the recent West Virginia Writers’ Conference.

Writing about writers, knowing writers will be reading what I writered about them – geez. No pressure, man.

The first nature column is up on Weelunk.

Have a dead tree in your yard? Don’t be too hasty about taking it down.

I endured a rough patch in April and May. As the weather refused to warm, I engaged in regular self-abuse and derision at my perceived lack of success. I received many a rejection letter for my book. Autoimmune brain fog hampered every effort to write something new (as evidenced by the silence on this site). Spring was a real shit show in writer-land. I was ready to give up and go to law school.

But with the West Virginia Writers’ Conference and the boost of self-confidence I gained in winning that competition, I feel now that I’m still on the right path, and that forward momentum is key to staying out of that mental pit.

Weelunk, Wheeling’s alternative news and blogging platform, has given me a golden opportunity. Every alum of Chatham University’s nature writing program dreams of an opportunity to reach out with their words, to affect positive ecological change. I’ve been given this chance.

My regular Weelunk column, Valley Views & Varmints, will soon be debuting on Weelunk and appearing with regularity!

Yesterday, a picture of me looking sweaty and bedraggled appeared in an introductory post.

Thanks, summer, for your bounty.

I’m pleased to write about another fantastic trip down to Ripley where I and two of my fellow Ohio Valley Writers attended the 40th West Virginia Writers’ Conference at Cedar Lakes. I won three awards: honorable mention and first place for two essays in the non-fiction category, in which I competed against 56 other brilliant writers, and second place in the Pearl S. Buck Award for Writing for Social Change category.

What makes the West Virginia Writers’ Conference special, I think, is West Virginia itself. I’ve been to other writing conferences. I went to AWP in Washington, D.C. in February, and it was very businesslike, very efficient. AWP is a monster machine, with hundreds of panels, hundreds of publishers, and thousands of people. I learned a lot at AWP. I also wore myself out to the point of exhaustion. And while I did do some networking, the crowds made it difficult to really forge any new connections from scratch. It’s hard to remember faces in such a literary cacophony, and the faces who did invite me to submit my manuscript said no thank-you several months later. In a perfectly nice way, mind you.

West Virginia Writers is like camp. We’re a small state and a ferociously proud one. And while the news will never tell you that we’re full of word artists, they come out of the hollers for this event, and they’re a most enjoyable crowd. They’re friendlier than church-folk, even. West Virginia writers are like puppies: they wag their tails when you show up and welcome you with excitement.

Plus, there’s moonshine. Apple pie flavored. Meta bonus points because I was drinking moonshine while bathing in the Strawberry Moon’s shine.

I learned things, but more importantly, I connected with the other writers in a way I did not do at AWP or any other conference I’ve attended. These are folks with whom you can sit down at any meal in the dining hall – quite literally just plop yourself down with strangers – and become friendly and feel supported. There are no jerks. There are no douchebags. We are bonded by our West Virginian-ness.

And in our state, that’s not a bond to underestimate. Our love of our home, despite all of the negativity it endures from both the inside and the outside, emerges in conversation. It spills out in workshop when the leader asks who returned to West Virginia after living elsewhere and twenty hands shoot up. We are not only proud to be from West Virginia; we are all in love with West Virginia. And no matter how many times we land in the 49th spot on an unenviable list, we resist that label. We’re more than an opioid addiction. We’re more than an incest joke or a color on a political map. This place is our home, our bloodline. And that blood runs through the veins of this conference, too. Our state is our spectacular main character; it creates our narrative tension and our blessed resolution.

Does this kinship flow at other conferences? I cannot fathom a Manhattan writers’ convention. I can’t imagine passing a group of New York writers sitting beside a bonfire and being invited to join them. In what other world can I approach an esteemed author and come away with a hug or an invitation to call them up for a chat? Who else might toss me a cold beer and exchange a few bad-cat stories or an hour of bluegrass music?

At every writers’ conference, I come away with something of value: a new technique, a business card, a signed book. When I leave Cedar Lakes, I’m also coming home with a renewed sense of community, of deep and enduring pride to be a West Virginian. From the hollers and panhandles of our state the writers come forth for this annual pilgrimage, and though it’s writing that brings us together, it’s our love of our land that we truly share.

This year we took an oath. We swore to support one another in literature and friendship, to remember the great authors who wrote before us:

And we remain a pack, as the pledge suggests. For forty years the West Virginia Writers have kept the torch burning in support of one another, of the story tradition. It’s one I’m so proud to be a part of.