We’re about to undergo an event here in West Virginia. It’s a miracle of nature that happens only once per generation, a much-studied, much-anticipated entymological occurrence that makes the news and water-cooler conversations: the arrival of the periodical cicadas, a.k.a. the 17-year-locusts.

They aren’t locusts, technically. We refer to them as such out of habit around here. But these are cicadas, the same insects that arrive in August to drone on for a month. The regular summer bugs are what’s known as the “dog day cicadas”; what’s about to arise from the ground after 17 years of underground dwelling are the periodical cicadas. They come in 17- and 13-year versions and they spend their lives under the earth, chewing on tree roots and undergoing various metamorphoses, from what I’ve read. Then, when the 17th spring has arrived and the soil reaches 64 degrees, they all emerge in one giant horde, a display of the awesome power of nature and the wonder of evolution.

I dread this emergence with every fiber of my being. In fact, I dread it so much that I’ve actually begun to concentrate my dread within my third eye in the hopes that if I resist their arrival with enough vehemence I may actually will it not to happen. And in so doing I will spare West Virginians the agony of Brood V’s wretched swarming.

It’s hard to consider myself a nature writer and admit that I despise the cicadas. I feel as though I really do my part to educate my kids when it comes to the creepy-crawlies. Every year Ben enjoys the arrival of the tent caterpillars (he calls them bagworms). We break open their nests and hundreds of squirming bodies plop out onto the ground. And I let them crawl on my arms so he can see that nature is not to be feared or choked down with a shiver and a gag. (This lesson wouldn’t apply if we lived in rattlesnake country, would it?) We also spend lots of time fondling earthworms and kissing crappie when we catch them. We dig up Florida Fighting Conch down at the condo in Fort Myers Beach, and poke at their slimy, tongue-like feet.

I don’t think that nature is gross at all. It’s miraculous. It’s nifty.

But not these fucking cicadas.

I was three when they first appeared, and I have no memory at all of the experience. My parents say it was eerie: as Dad walked his dog in the evening he became aware, suddenly, that they were all coming out of the ground, and millions of red eyes watched him. They rose like the dead in unbelievable numbers, discarding their shells as they did so at the base of every tree in piles ten inches thick. Mom recalls how they screamed all day, so loud that conversations were drowned out, and she specifically remembers the cicadas clinging to her shirt and sitting on her shoulder, singing their love songs in her ear.

They returned again in 1999, and as luck would have it, I did not return home from college that summer and missed the periodical cicadas entirely. The stories from that year are bland and uneventful; for whatever reason the bugs were not as intense as they had been 17 years prior. Nobody I’ve talked to can recall anything striking or significant.

In 2013, we saw what scientists call “stragglers.” These are cicadas that, for whatever reason, emerge 4 years too early or 4 years too late. There were a handful in the yard, just enough for the boys to gather and organize a cicada circus. I recall the red eyes. Dog day cicadas lack the red eyes and for that I am thankful. Demon bugs belong down in hell.

Yesterday we had some leaf-rakers tend to our yard. Over the long, cold months, the leaves tend to get caught in the gardeny places, between boxwoods and lilacs and under the hemlocks. When the guys raked clean the bare soil, I saw that it was pock-marked with holes, a tell-tale sign that cicadas are here. And when Benjamin lifted a rock, there they were. 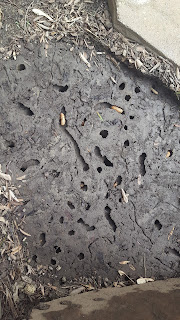 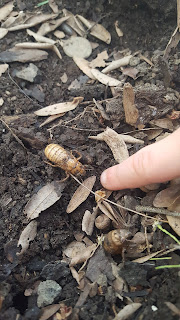 They’re not yet ready to officially emerge. Still in their nymphal stage, they’re just below the surface, tunneling around like ants in an ant farm. Each rock and flagstone and flower pot we lifted had cicadas under it, burrowing. Ben poked at every single one of them, trying to decide whether they were fascinating or repellant. I tried my best to imply that they are fascinating. I even picked up a nymph and let it crawl upon my hand.

But I hate them. They’re going to cling to me. And rrrrrraaaaaiiiiirrrr in my ear.

Surely this is an evolutionary reaction. Somewhere in my genetic memory lies the recollection of an Egyptian plague, and the subsequent biblical trauma that ensued. It was a rough time. First, we were enslaved for 400 years. Then a plague of locusts started a big-ass coup, and everybody ended up wandering the desert for forty years. There were sunburns and lechery and a golden cow, and it really sucked.

I think I’m on to something, here.

Anyway, the El Niño has brought a warm spring and an early spring. And the bugs are awake and raring to go. Every day I wake up and wonder if they’ll be out, and I stare out at my baby redbud tree knowing I have to cover its new growth to protect it from the egg-laying females who will deposit their icky little spawn in the branches and damage them.