We’ve not been to the lake much. This has been the most horrendous weather I’ve ever seen. Summer has decided not to arrive in West Virginia. My heart aches because I’m such a summer gal, and I worship the sun so deeply (from underneath my long sleeves and large umbrella tent, that is–precancerous mole). We went out this past Sunday for the day. The weather was comfortable and humid, but the water temperature hovered around 77 degrees. Unswimmable for adults. The kids were in until they turned blue, naturally.

We took a boat ride on Sunday afternoon, and headed northwest towards the marina for gas, in the direction of a heron who was perched in the middle of the lake on a floating log, a very unusual scene. As we approached the log we saw that it was not a log at all but a styrofoam buoy impaled by a dollar store solar light. Two power cords came together on the buoy and one dropped over the side and down into the depths. To our right were several more.

My parents chattered aloud about the buoys, which, as we rounded the corner, stretched off into the distance. Rows and rows of little white squares and solar lights and thick black cords anchoring them to whatever lay on the bottom. Dad wondered if it was a race course. (The horsepower limit on Piedmont is 9.9. That would be a mighty leisurely race.)

The feeling which began to rise in my belly got stronger as we found ourselves plowing towards the marina in what appeared to be a channel between two lengthy rows of these buoys. My father, ever the humorist, was in the middle of his theory on alien surveillance when I turned from my seat up front and said, “It’s fracking.”

Nobody took the bait. Nobody jumped onto my bandwagon. When we got to the marina and pulled up to the gas pump, though, the attendant confirmed it. “They’re seismic sensors,” he said. “Antero is mapping the lake bed.” 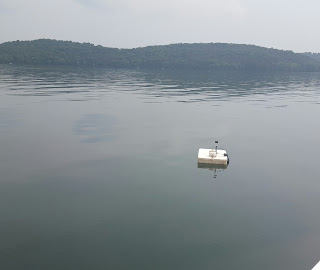 There must have been hundreds of them. The mood on the boat sunk a bit. Actually, it dropped over the side and into the depths of Piedmont. Shawn steered us down to the dam for a boat ride as the day began to cloud up, and we passed row after row of sensors, floating so quietly that they may have been October leaves. The solar lights on the buoys didn’t match, I noticed. Antero, the drilling company, didn’t even buy matching lights. They just went to Walmart and cleaned out the shelves. Some were square and some were round and scalloped. Some are the same lights I just bought at Dollar General for the edge of my new deck.

The haze of the afternoon turned the surface of the lake gray, and in so doing made the buoys harder to see until we were close to them, giving them the illusion of popping out at us, a shitty little surprise party every 50 feet or so. And for the first time in my life, movement on the lake was restricted. We had to weave around the sensors carefully to avoid hitting them. A body of water is a physical representation of freedom, in a sense. Barring the presence of oyster bars and manatees and other boaters, you can go where you like. You can make right turns and u-turns and drive in circles should the spirit move you to do so. That little patch of shore right there? That’s accessible. There are no exit ramps or stop signs. You’re floating freely; go about the universe just as you please, because it’s Sunday on the lake.

Except you can’t go where you please on Piedmont, now. For the bargain price of $95 million dollars, the Muskingum Conservancy Watershed District sold our freedom of movement to Antero Resources. More importantly, they sold the water under our pontoons for the drillers’ machinery. They sold the school of white bass my children caught for two days in May, and they sold the great blue heron who stood on one leg and watched our boat go by. They sold the new bald eagle chicks who have just established a home on the lake for the first time in living memory.

I’ve spent my adult lifetime watching environmental crises unfold “somewhere else.” And those crises hurt. They make me feel impotent. Frozen. I can do nothing to help the polar bears. I can do nothing to save the last white rhinos. No matter how strong my desire, the collapse is out of my reach, and seeing it in photographs provides just enough of a cushion so that I can close my eyes at night, and push away the images.

This bird on this buoy was not an image. It stood before my eyes, in real-time. The heron preened its feathers as though it were standing on the shoreline after a meal, moving through its routine quite naturally. One short bird-life, unchanging. But it is changing, and the bird hasn’t a clue.

I have a clue. I’m no longer staring through the some journalist’s lens, or reading the words that fell off of his fingers as he lay awake, unable to shake what he saw. This is Piedmont; this is my home. This is my crisis, for the first time in my life. There’s no screen to dim, no button to push to make this go away. And as naive as it sounds, there’s something different about a crisis on your own back door. It takes up a physical space in your body, creating a palpable ache you can touch through your skin with your fingers. It’s a hole. An empty place of sorrow.

As we motored back to the dock, only my children seemed chipper. I thought about our respective timelines. My father has known 65 years on Piedmont, and he told me it has always been the same lake. Vegetation has grown up, retaining walls and docks have taken differing forms, but Piedmont has remained herself for a lifetime. His lifetime. My mom has known the same Piedmont for 45 years, and I for 35. The lake has never changed.

My children’s bodies were clearly visible in the chilly water, which has an emerald cast most of the time. Rather than looking soupy, this is a rare, crystal green, and after our boat ride they floated and dove and laughed and came onto the dock smelling like nothing at all, no chlorine or salt or sweat. Benjamin is five, and now Piedmont has changed for him. He won’t grow up and know the same shoreline, the same fish and birds. He won’t gulp down the green water as he swims. For Ben and Andy, Piedmont will always be a lake that was.