*Please see the next blog post for the Official Nature Writing Blog Post of Week 6. This is a blather that I cannot keep in, because I blather.*

Now that I’ve spent a brief few moments exploring my senses and paying homage to the brilliant sun and a sky that makes me feel as though death would be nothing more than lying contentedly on a slab of ice alone (in a good way…sometimes lying on a slab of ice isn’t as much fun as others, say, after a hockey stick to the face or when you’ve just been pulled out of a morgue drawer), I can tell you what else happened. If you read this one, read the post below first. That’s the official one. It was all true and honest. So is this. Pam Houston and her 20% can go pick an ear.

When I left the house it was in disarray. School was letting out at 11:30am, and I had to make a 50 minute drive out, do my contemplative thing, and make another 50 minute drive home. AND make time to tinker with the toilet because it needs antifreeze and I had so much coffee that there’s no way I was going to get away with a quick wilderness tinkle behind my mother’s boxwoods. I left childen unshodden and a husband in the shower undoubtedly staring off into space having deep thoughts about man things like boobs and NATO. 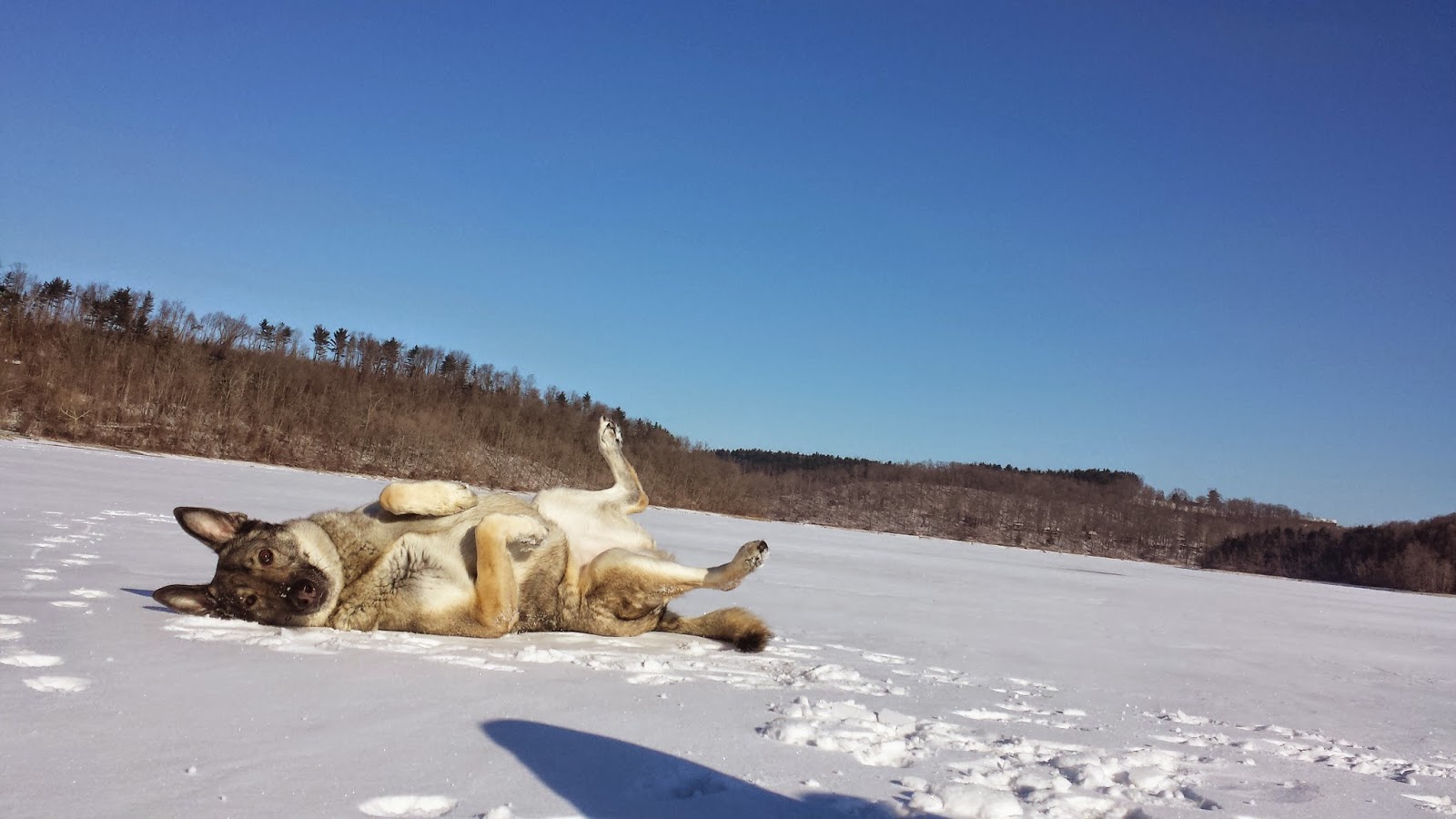 When the girls and I arrived, they bolted for the lake. In the cabin I donned heavy snow pants, ski gloves, a balaclava that makes me look like an egglplant, and a hat over top of that. (I knit the hat myself, so I might as well have worn a paper towel on my head for all of the warmth it offered.)

I had my phone/camera out taking photos of the rock where I learned to jump as child. I was taken by the way it has a quiet cave underneath its eastern corner, and I always think I’d be the fat little bass that hangs out under there 5 days a week until the children come on weekends to throw sticks and pee off the edge. Being a writer, I can’t really just enjoy looking at a rock. I have to find meaning in a rock. Metaphor. Make a comparison. Find a symbol. Gah. It’s a rock that has an uppy corner. Shut up. You’re not a bass. You’re an ass.

The warmth of the sun called me out onto the ice and I decided to test its thickness with my own body weight rather than something sensible like a rock or one of my dogs. (That’s why I take two out there, right? Let’s be honest. I’ve got my ice-testing dog and my spare dog. They’re like birth control–it never hurts to double up because nobody likes an unexpected swimmer.) 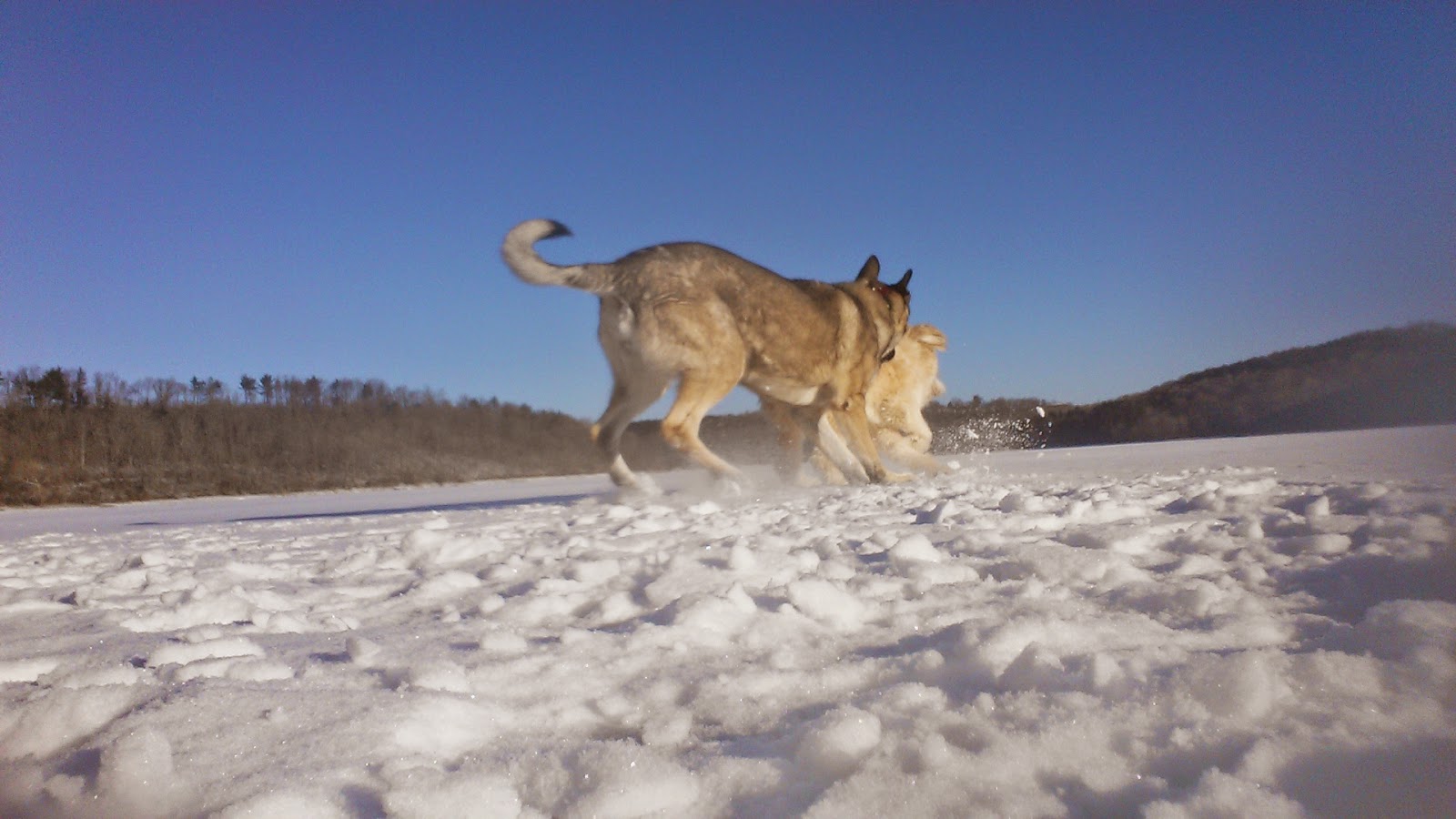 My ego decided to come with me today. In my yoga class we’ve started this baloney of taking off all of our clothing, putting on some gaudy yoga pants and a tank top, going out into the snow and striking a yoga pose. And then we send them to each other and dare each other to top it. I wasn’t about to take off all of my clothing, but I decided to set up the camera, hit “record” and film myself doing a bit of eagle out on the ice. Wrapping my legs around each other, binding my arms was tough in so many thick layers, but I did it. As I retrieved the camera phone, again my vanity got the better of me and I hit “play”. There was my dumpy winter form on the beautiful ice, contorting itself into knots, and there behind me was my German Shepherd succumbing to an explosion of bloody diarrhea. Namaste, idiot.

That smart phone has an uncanny ability to reflect buffoonery every time. It calls me out like an overly-honest 4-year-old, the same one who appeared in the shower stall the other day to tell me I had some real nice flappy boobs, and how did I to go the bathroom without a penis anyway?

The commotion was happening along the shoreline. I was down-dogging on a slippery patch of ice uncovered by the wind, and for once there was no hot breath in my face. Again, as with a little kid, silence means they’re into something. When I regained my footing, Maya and Nugget were on the shoreline, digging furiously, and something was squealing. Chirping. Barking?

Moving in snow pants and thick boots isn’t easy when you’re moseying; when you’re hauling buns it’s nearly impossible. I couldn’t get there fast enough, and when I did, there was blood all over the ice. Maya was smiling up at me with a beet-red mouth, and I couldn’t tell if the blood belong to her or the shrieking varmint who was hiding in the sand under the thick lip of the ice where it piled along the shoreline. Clearly, dog and beast battled it out and beast dove for cover. Unable to break the thick frozen barrier, Maya took a different approach and set to work digging from the other end, through the muck. The thing screamed.

From my angle I couldn’t see at all what it was, but only a few possibilities extended themselves on a such a bitter day: squirrel or woodchuck. The latter hibernates, but this seemed to be making more noise than I’d expect out of a nut-gnawer. Regardless, the critter tangoed with a big dog and probably lost a foot in the process. Most likely, its life’s pendulum would stop swinging within a day or two. Suffering animals prefer to hide themselves away, to make themselves small and quiet, and only in their most desperate hour do they call out in anger and defense the way this creature called out. I could offer it nothing but the peace in which it might die.

Instead I turned on my video camera and slowly inserted it into the crack in the ice, hoping to identify whatever victim lurked beneath the surface.

I had that coming, I’ll admit. Not only did I react with a distinctly anti-eco-feminine nancy-boy yowl when it squalled at me, I also caught it on film and feel obligated to offer it up on the confessional altar of Google’s favorite blogging platform as penance. My name is Laura and I tried to film a wounded weasel-thing under a block of ice because I was afraid it would bite my face if I looked too closely.

The clock inched closer to the time of my required departure and the girls tore themselves away from the ugly scene. Happy to leave it behind, I took an extra 10 minutes for an ice savasana and received, in return, a hot tongue in my ear. Not the good, Saturday-night kind, either. The kind that smelt of resentful muskrat.

Up the hill in the house, I sat one more time on the world’s coldest toilet seat, not having been smart enough to turn on the heat when I arrived. But the car was still warm, and I loaded up the girls and drove out of the empty neighborhood, saying goodbye to the cabin for another week, and considering what I’d learned.

When a nature writer is in her chosen place in the year 2014, she may be doing any one of a number of things which do not include actual reflection. The intrusion of the smart phone into nature will prove to be the downfall of the deep thinker. Too great exists the temptation to amuse ourselves doing stupid-ass things that ultimately serve only to make us laugh, to give us an excuse to stare at our own faces rather than the face of the sun (actually, don’t do that – you’ll go blind). Hidden wonders wait under the ice for the soul un-tethered to her technology. A dog cannot find all of the gems in the wilderness for me. Next time I’ll have to look for myself, look at what’s before me.

For example, the log I smacked with my own face on the way back.

As I rubbed my split lip in the car an orange exclamation point lit up my dashboard, and an icon indicated my right front tire was low.

Low? That sucker was limp. Moreover, it was hissing. A steady stream of air was pouring out of the husk of its bulk. In the rubber flesh was embedded a tiny spearing rock. Like Dillard’s frog, a water bug had come up from under the tire and eaten out the inside, leaving a crumpled skin. Mother f*cker. This is because I tried to film a rat under the ice, isn’t it? As I crouched in the 3-degree air, it occurred to me that today was Friday the 13th. I wasn’t yet out of the shade of the hill, and the cell signal was at least a few miles away. Crap, I thought. Can I roll out of here on what little air is left or should I go back to the house and use the land line to call AAA or Shawn? I decided to gamble on the nearest gas station, 20 miles away.

As I emerged into the sunlight, I dared to pick up a little speed and thought I might just make it.

Rounding the bend, movement caught my eye and I slammed on the brakes as an inky black tomcat shot out of the bushes, crossing the icy gravel road in front of my car.

A better writer would come up with some conclusion. I’ll come back to this blog, soon, and write one. Until then, put that in your corn maze and husk it.