Skip to content
I came out here thinking, for whatever reason, that today would be a hike in the woods. I suppose all this talk of “wilderness” has me in a woodsy frame of mind, because I’ve always associated that term with a forest. There’s plenty of forest out here, and I look forward to watching winter progress and hope that spring will arrive early enough for me to see it unfold here, too.

I wasn’t thinking about the temperature, either. (Insert picture of utterly ridiculous hat I had to dig out of the closet because I forgot a beanie…where did we get this hat anyway? None of us hunt and we all despise camo. Whose hat is this? I look like Ma Kettle. )
If I had been thinking about temperature, I’d have remembered that this is the week for the annual ice walk. Granted, the temperatures have to cooperate, but in January the temps almost always drop below freezing for at least a week, and if it’s cold for 10 days, the lake is frozen over. I’m delighted to see it when I turn onto the lane, and moreover, it has that rare, glassy look. This is ice you can skate on, which requires a perfect concoction of weather; the lake froze last week in bitterly cold temps, and then on Sunday we had rain and the air warmed up just enough for the top half-inch of ice to melt, and then it froze again when the sun went down. The result is Zamboni-quality ice. I can see it reflecting back the blue sky.
So I decide that today should be devoted to an ice walk, because it’s an infrequent phenomenon, and because it’s so beautiful and so meditative. And hell, why pass up the opportunity to risk my life all by myself in place with no other people and no cell service? 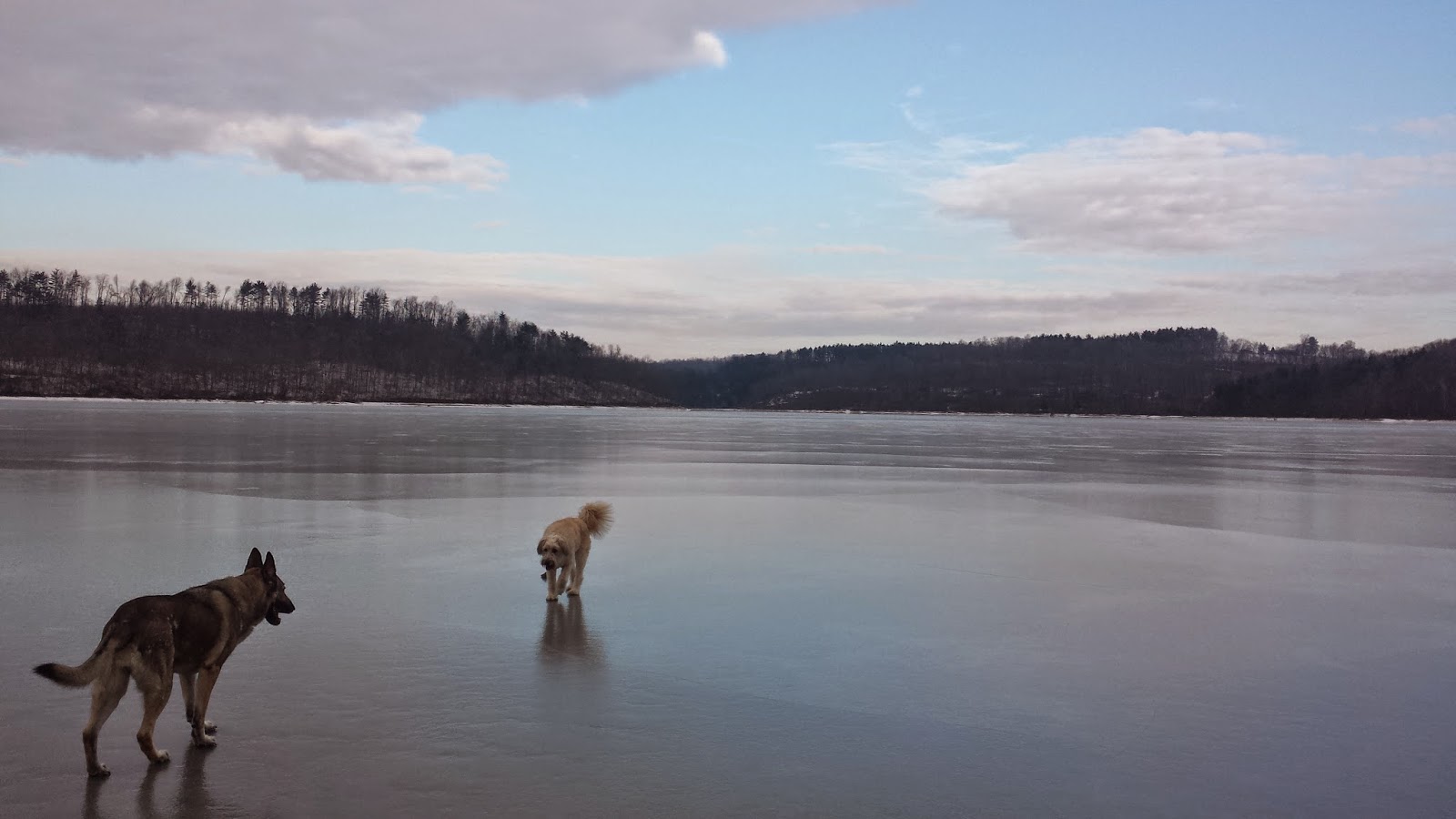 She and Nugget are the only animals I have seen today, save for the red-tailed hawk on the wire on the drive in, and the bird I believe to be a swift lurking around the shoreline. Every creature has gone away or to sleep.
I walk along the shoreline until I reach the bend in the lake. I peer around it and see the channel leading off to the south; everything is frozen. I’m talking manically in a Scottish accent to my dogs, about the nature of ice and cracks and wondering why I feel the need to fill up the silence when I get an unmistakable whiff of skunk. I can’t see any critters around, and the stink does tend to carry for hundreds of yards. He’s probably way up in the woods. I was wrong–not every creature has gone. Nevertheless, it’s a good time to turn around. When I do, I look back towards our lane on the hillside and see the cabins, roughly 25 of them, squatting in the woods above the lake. They’re all deserted except for our neighbor Frank, who lives here full time with his two yappy shelties. Twenty-five families who have summer homes, who have to schedule their time with nature between 5pm Friday and 8pm Sunday.
We have to work so hard to relax.
I sit in the cabin to enjoy silence with a cup of tea, but the heat is slow to crank up, and my digits are too cold to type. Moreover, I’m in a lake frame of mind. Writing will happen at home, reflectively, in fleece pants.
Today’s lessons:
1. A dog is a fine role model. Everything is nature to her. Everything is equal in her eyes, worthy of her time and energy. Whether or not it brings her pleasure, she inspects it all the same. The things that do bring her pleasure are reveled in. She’s joyful. She’s happy to be alive.
2. Ice has an audible heartbeat. It sings. It’s not to be trusted and takes 35 years, at the least, to learn.
3. I get a kick out of the same simian rock-throwing behavior that amused Ralph Waldo Emerson.
4. Change is coming to Piedmont. It remains to be seen how much change, and how noticeable that change may be. It’s not silent out there. Humans are on the move, and no matter what Rogers says, there is nothing natural about what is about to happen here.
Bonus lesson: Pee before I lock up the cabin. Those were some frozen, alabaster hams.
Here is a 5-minute video from my morning Piedmont Lake ice walk. You can hear the ice talking around the 20-second mark, 30-second mark, and as an occasional wump wump in the background. The dogs had a great hike.
As I was packing to leave, the sun blessed me and the ice by showing it’s face and the clouds blew away. I noticed that the ice was less reflective with direct light upon it, or perhaps the magic of the early morning was gone for another 24 hours.
It was good to see the sun.

5 Replies to “Of Ice and Dogs”