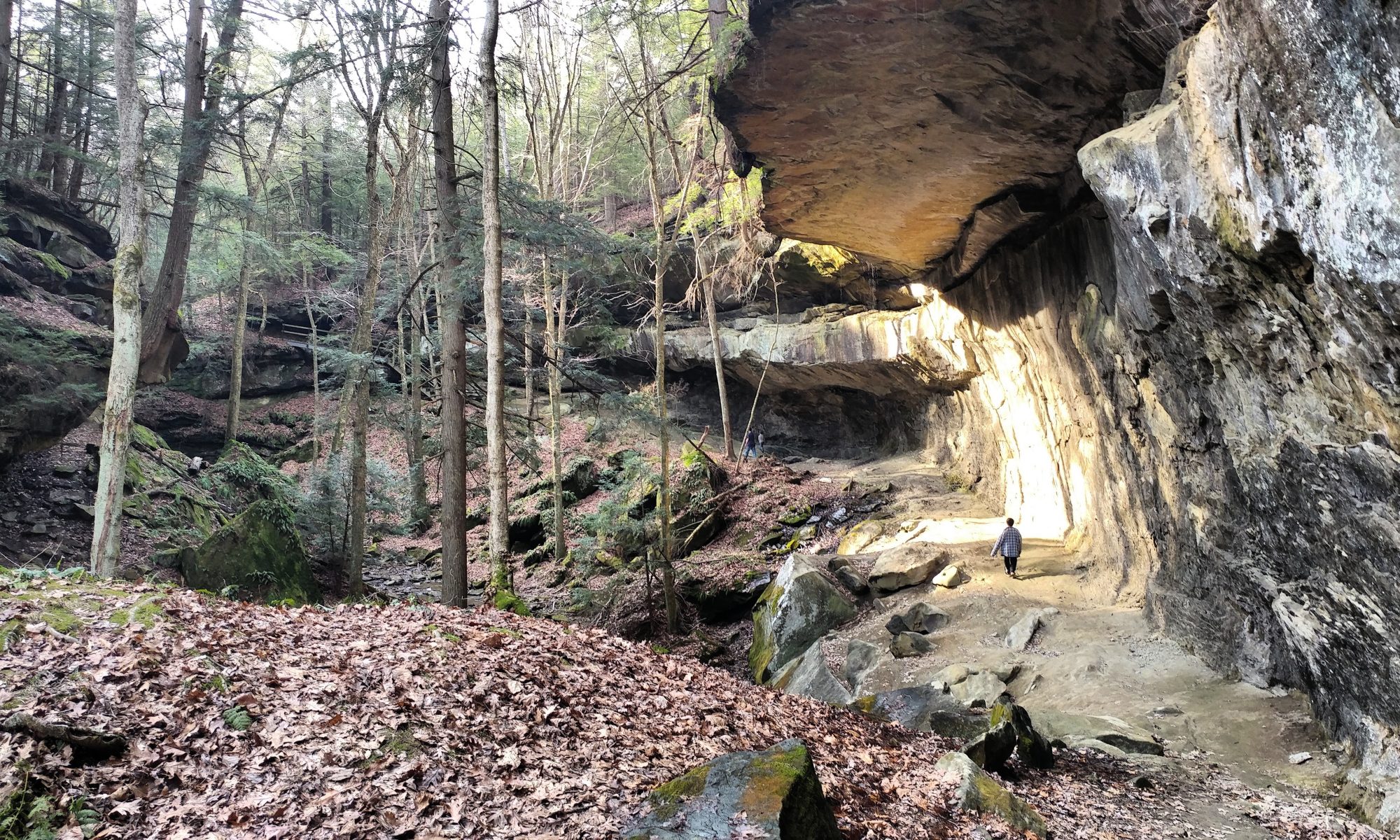 When I was a kid, my father took me to a wild and rocky place far, far from home. I don’t have any concrete memories of the experience; it’s one of those recollections that I’ve formed from the stories we’ve told over the years. In my mind’s memory, I see giant boulders and deep shade, and I see myself climbing up and over and down and through all of these rocks. And it was truly a foreign land.

In reality, I was only across the river in Belmont County, Ohio. It’s a big county, to be sure, but it wasn’t actually a land far, far from home, just a 50-minute drive. True, to a 10-year-old, that feels like a lifetime, especially when you’re sitting in the backseat with a barf bucket in your lap and hot Irish setter breath on the back of your neck. And parents never seem to slow down for more than half a mile, do they? 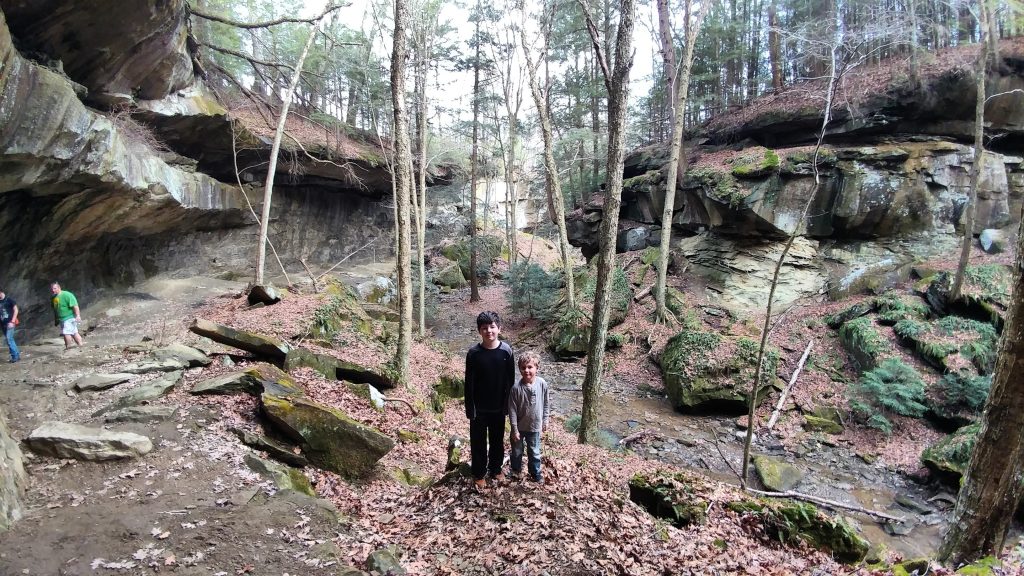 And he would, for a few hundred yards. Thankfully now I’m the adult, and when I took my own kids to Raven Rocks in Beallsville, Ohio this past weekend, I was smart enough to give them Dramamine for the drive over hill and dale with nary a straight stretch of road to be crossed.

You know the really great thing about Dramamine? Not only does it keep the puke out of the cracks between your leather seats, but it also sedates them faster than you can bark, “So help me, I will turn this car around!” And I don’t know about you, but I find that quality family time is always more enjoyable when the children are unconscious.

And don’t worry  about my parenting skills; they woke when we arrived at the rocks and picked up right where they’d left off, with Ben’s shoe in Andy’s left eye socket and Andy’s subtle suggestion that the tooth fairy might bludgeon Ben to death in his sleep boring into my younger child’s subconscious. All good. 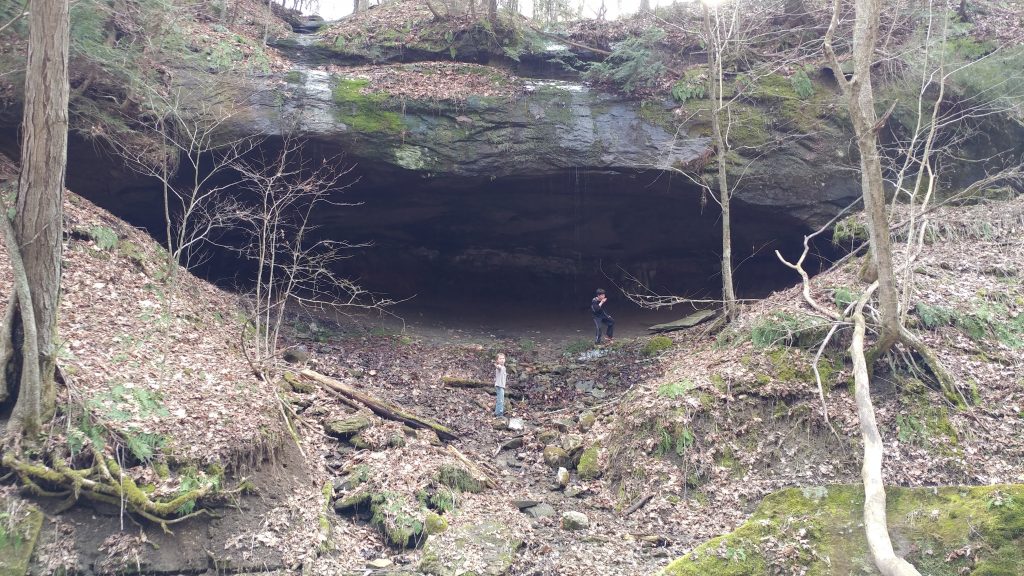 Raven Rocks, in southern Belmont County, was once a ceremonial site for American Indians around 760 A.D.  It’s a hidden ravine, tucked into a valley that looks like all the others around here, tight and narrow and crowded with eastern hardwoods. I’ve yet to uncover the specific geologic history of the 1,255 acres in the private park (protected from strip mining by the former headmaster at Olney Friends School in Barnesville, among many others), but it’s an unusual formation for our neck of the woods. The stream flows over a waterfall and has carved out a little gorge where cliffs overhang and Eastern Hemlock grow in the cool air. 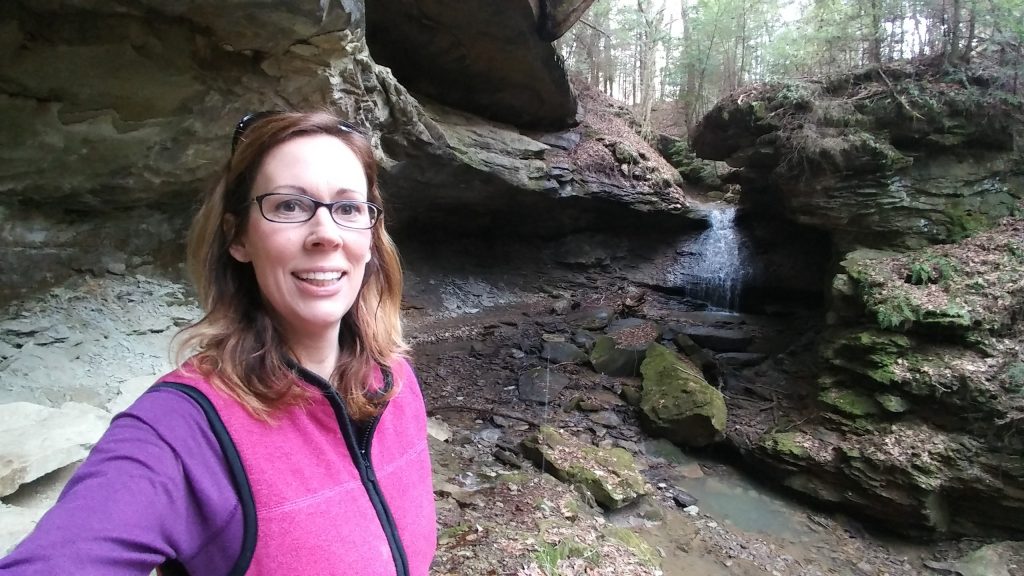 I’ve been wanting to go back to Raven Rocks for many years, but until recently it seemed like an awfully long drive with two barfers. Now that Benjamin is 6, though, he’s old enough to take Dramamine. And though they griped and complained about being dragged from the hypnotic monotony of their video games, we went to Raven Rocks on Saturday. And they were so glad that their mother talked them into it. It’s a kid’s paradise, and not only because there are ledges from which to fall and die and probably snakes to rustle up out of the rocks (the Schrader Center tells me there are indeed Copperheads in Belmont County). It’s just extra-fun nature. As an adult, I can find a lot of joy and peace in a hardwood forest. Just trees? Just fine. A stream? Even better. Rocks? Holy shit, get the kids over here, because if there’s one thing kids absolutely love, it’s rocks. Boulders. Things to climb and toss and chuck and roll and fall off of. 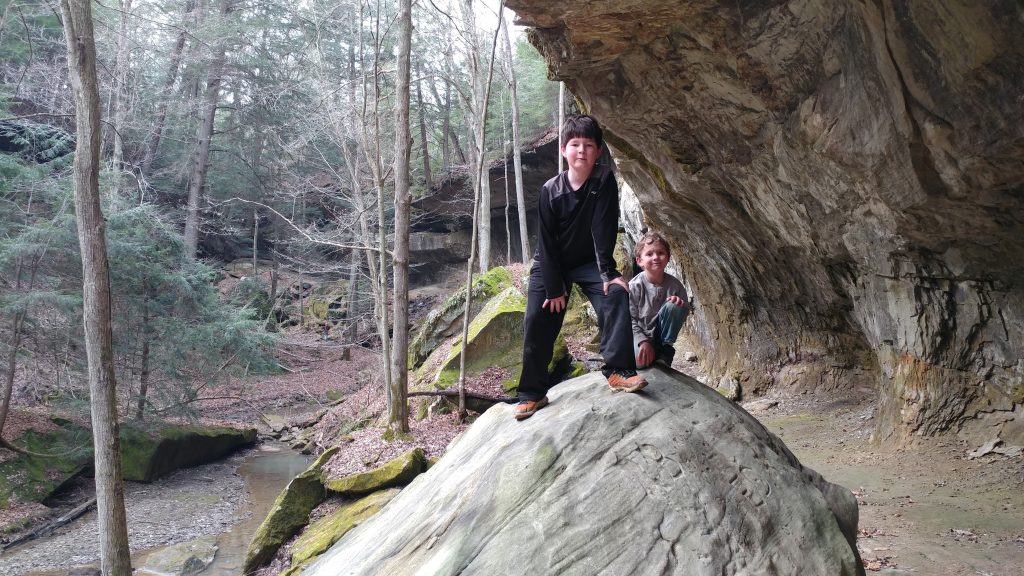 You can do Raven Rocks in a few hours. It takes 50 minutes to get there from Wheeling, and less than that from St. Clairsville, Powhattan, or Belmont. It takes an hour to walk around, and of course another 20 minutes to fish your kids out of the stream,  strip them of their wet clothing, apply surgical glue to gashes, Heimlich the pine cones out of their throats, and administer more Dramamine for the ride home.

The point of all of this is that most of us don’t have the time or energy or money to escape into the wilderness every weekend. As much as I’d like to, I can’t just bop down to the mountains for a hike to soothe my anxiety and neuroses. There are places here, nearby, that feel wild.

The longer I live, the more I realize that I have only ever encountered the divine in nature. I’ve been looking for it for many years, and of late, far more intensely than ever, but I haven’t found it beyond the forest. And I’m tired of seeking something that eludes me. 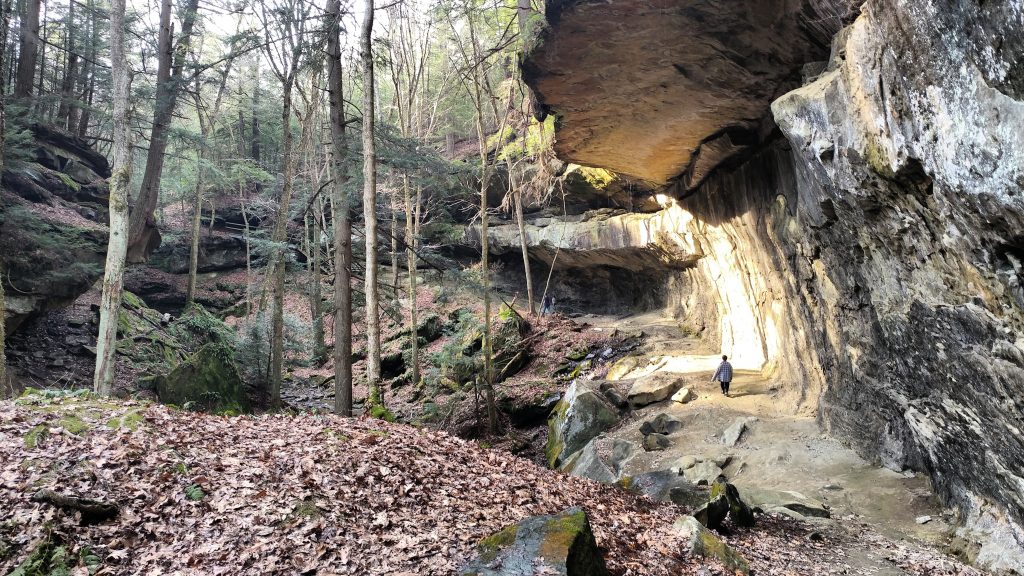 In Belmont County. Who knew?