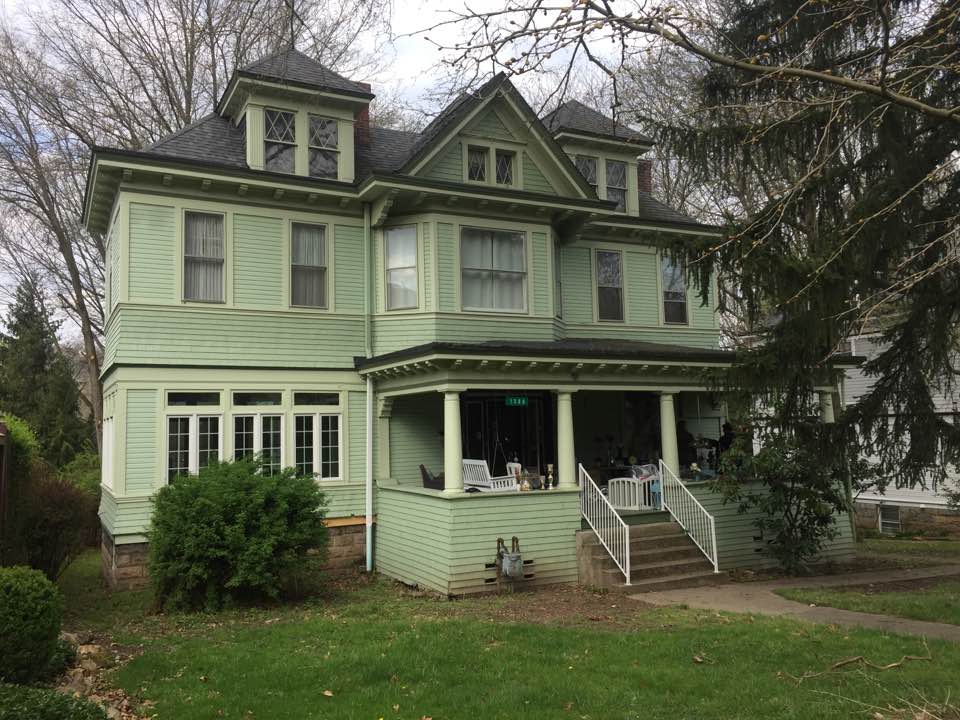 Our next door neighbors are moving out. They’re not just moving across town; we won’t be able to “meet in the middle” somewhere and have lunch. Meeting in the middle would require me to make reservations in Kansas City, and that’s a long way to go unless I’m really craving ribs. They’re going to Phoenix, to live near their family and be with their grandkids.

And I hate it.

My family owns three houses together, in a row on National Road, built by my ancestors one-hundred years ago. My parents live in House #1, I live in House #2, and House #3 is a rental property. We’ve rented it to businesses and we’ve rented it to families. I honestly think I prefer renting it as an office space. Workers show up at 9am and depart at 5. They’re not there on Saturday mornings when I’m feeding my fish in my Hello Kitty fleece pants. They’re not there staring out the window on a Sunday afternoon watching me read a book and scratch my butt. And most importantly, they’re not there to talk to me and be my friend. Because in a rental home, friendships always end in heartbreak.

Some lovely tenants have rented these homes. When I was growing up, a family with five children moved in next door. That day, heaven opened its doors and sent to me, a lonely six-year-old with a boring baby brother, an endless supply of playmates. Our dads built a two-story clubhouse for us. We put on circuses in the backyard and watched Inspector Gadget and He-Man every afternoon. We rode Big Wheels on the driveway and played kickball on summer evenings. And then they had to move out and my heart broke. They moved only a mile down the street, but we went our separate ways as children tend to do when they’re out of sight of one another.

Other memorable and kind families lived in these houses, but just as memorable were the losers. The family to whom my mom, then pregnant with me, gave a puppy she found on the roadside. They tied it up out back and threw water on it when it barked. (She took the dog back.) The people who moved out and left three-quarters of everything they owned for my father and uncle to sort through for four months; the people who moved out and left all of the dirty diapers. And let’s not forget the dude who ran a travel agency scam out of the house. As the FBI was breaking down the door in the front, he was bolting out the back . (We inherited his couch, though I suspect it was tainted with bad vacation mojo given that, for several years in a row, we were plagued with ill-timed weather and a disturbing recurrence of the same awful episode of Suzanne Somers’ 90’s sitcom Step by Step).

Some jerk hammered nails into the beautiful mantles, to hang Christmas lights or stockings or homemade venison sausage. A group of Mormons moved in and somehow released a dwarf hamster named Gray Cloud, only to find it a few weeks later flattened on the road out front. Their kid put holes in our hose with a set of darts.

The jerks are easy to hate, but they’re also so easy to say goodbye to. Though they may leave chaos when they move out, they also take with them a dark cloud of irritation. Boy are we glad those idiots are gone, we say, and then we turn our hopes to the future because the next tenants might be freaking awesome. That’s a grand feeling. It’s like opening a wedding gift to find a tasseled silk throw pillow with your faces on it. It’s appalling, but there’s no way that the next gift won’t be an improvement.

The next gift, the next tenants, were freaking awesome. Sue and Ernie were our friends. They fit in here, and that’s never an easy feat to accomplish because it takes a special family to live in these old Victorian homes. They’re hard to heat, hard to cool. Stairs creak. Ceilings crack. Sometimes water drips down. Once in a while a bat swoops in. While you’re waiting for the shower to heat up you can knit a cowl or write a sonnet; none of the plugs fit the outlets. You need an adaptor. You need a fan. You need pliars. You need a repair guy. There’s a door that won’t shut; a window that won’t open. The kitchen floor slopes to the northwest. The porch kinda sags. There’s a squirrel in the attic. Wrens live in the mailbox.

I once calculated how many times I ascend and descend stairs in my house, on an average day. The number was 64. So in addition to deep pockets for the utility bills and patience with critters in your personal space, you’ll also need healthy knee joints. Because don’t think for a second that the laundry machines are going to be anywhere near the bedroom. That’s right, buddy. The washer is two floors below you, and somebody plastered over the old laundry chute. Start hauling.

When you find a tenant who sees beyond the quirks and annoyances in your old house, you’ve found a kindred spirit. I’m not here for ease of living or an unburdened bank account. I live here because this is my ancestral home. A tenant, however, shouldn’t be expected to understand or appreciate these things. It’s just a rental, after all. They move in for a few years, and then they move out and move on.

My friends, Sue and Ernie, did appreciate these things. Maybe not the 64 trips up and down the stairs. Maybe not the bats in August. But they knew they’d been woven into the tapestry of a family’s legacy. And in so doing, they became part of our family. When neighbors choose to cross the property line, boundaries blur. When I look at photos of my kids playing outside, I see Sue and Ernie’s house in the background. When I look at Sue’s photos of her yard, her visiting grandchildren, I see my house in the background. We became part of each other’s landscapes.

When I told Ben and Andy that Sue and Ernie were moving back to Phoenix to be with their grandkids, Benjamin said, “But I thought we were their grandkids.” I understand his sentiment. These days, I have many wonderful acquaintances who drift in and out of my day. I know a lot of kind, friendly people. But I have very few dear friends. And as I pause to get up from my desk and realize they’ve just driven away for the last time, I know I now have even fewer.

Next time, I’m not falling for this love-thy-neighbor stuff. I’m sticking to my side of the fence. I’m going to wave and go about my business and never get attached again. No more drinks on the porch. No more happy holiday barbecues and birthday parties. No more hugs, no more chit chat and laughter.

Come on, crappy tenants. Come take a look at the house. Meet your new neighbors. We promise to be gruff and rude and blare music and never share a margarita on the deck. We promise to keep our shades drawn and leave our dogs out to bark. You can rent the house, but don’t fall in love with us.

Because we can’t let ourselves fall in love with you.