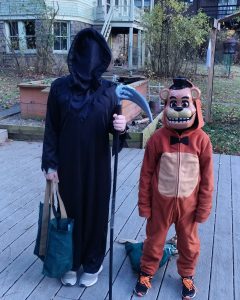 We went trick-or-treating yesterday. As usual, it was freezing, even colder than usual. My kids didn’t give a hoot about the temperature. They’re extra bitchy about coats; Andy is a human furnace and Ben refuses to have his costume marred by the likes of anything out of character.  He went as Freddy Faz Bear from Five Nights at Freddy’s, which is a horrible little video game that forces the player to creep around a Chuck E. Cheese kind of pizza place and make sure the animatronics don’t come to homicidal life. Of course, the animatronics do come to life and creep closer and closer in the dark. You either stop them with your flashlight and defeat them, or they reach you and jump-scare the shit out of you.

Jump scares are a big thing in my family. It’s become part of the Roberts culture. It started a few years ago with a kid lurking behind a door, giggling loudly as he waited for Shawn to come up the stairs and pretend to be scared. Then, it got a little more sophisticated. They learned to turn off the lights. Ben learned to bide his time and remain in his hiding place without giggling. Once, he waited outside the bathroom door for a full twenty minutes as I showered and applied hair goo and face goo and brushed my teeth. When I emerged, quite naked and relaxed, he came flying out of the shadows and shouted, “Aaaa!!!!!” He earned that scream. And I hated it.

Shawn actually started this jump-scare tradition.  He began torturing the boys when they were too little, in my opinion, to endure such fright. He’s very good at what he does. He’s hidden under Andy’s bed and reached out to grab Andy’s ankles. He’s lurked in a dark room and made creaking noises; the boys know he’s in there waiting to scare them and push each other towards the doorway. When he finally does jump out, it’s loud, pants-shitting terror. Each morning when he comes up the stairs to greet the three of us at the breakfast table, he does it with a jump-scare. Usually, he targets the boys, but if I have my back to him while I make my smoothie, he’ll do it to me.

“What the f— is wrong with you!?” I always scream at him. And he laughs hysterically. Recently, he jumped out at Ben with such vigor that Ben burst into tears. It was simply too much for his little nervous system to handle.  He should have felt guilty, but I think his primary emotion might have been more accurately described as “pride.”

I hate jump-scares. But I’m in the minority, here. At the Spirit Halloween pop-up stores, they sell jump-scare decorations. You step on a pad and a hairy spider lunges at you or an arm comes flying from behind a gravestone to grab your leg. Ben and Andy run through the store to find each and every display before they can focus on buying a costume. Personally, I’d be content to never be startled again as long as I live. I feel no desire to step on that pad and have a 2-foot arachnid lurch in my direction.

This is a golden time for Shawn. His boys are old enough to participate in his beloved tradition and young enough to think it’s hilarious and cool. Halloween is his favorite holiday. He hangs tacky lights all over the mantles and woodwork in the house. He keeps scary masks in his desk–not just for Halloween use but for general jump-scare merriment. Last evening, he decided he was going to dress up for trick-or-treat, too. But instead of wearing something ghoulish, he found Andy’s old lady mask from last year, an expensive piece of latex that transforms the wearer into a crone. That would have been disturbing enough, but then he decided to pair it with my unicorn onesie. And my hiking stick.

I’m not sure what the theme was, other than “disturbing.” He said the onesie kept him warm in the 30-something degree temperatures. And he remained in character for an hour, cackling at little children and repeatedly poking me in the ass with his cane. I cringed when we came upon houses with elderly residents handing out candy. Then again, Andy wore the mask last year on a parade through Peterson Rehabilitation Hospital, so I suppose the tradition of walking the line between humor and offense continues.

On a related note, this was the first year I brought hooch in my coat.