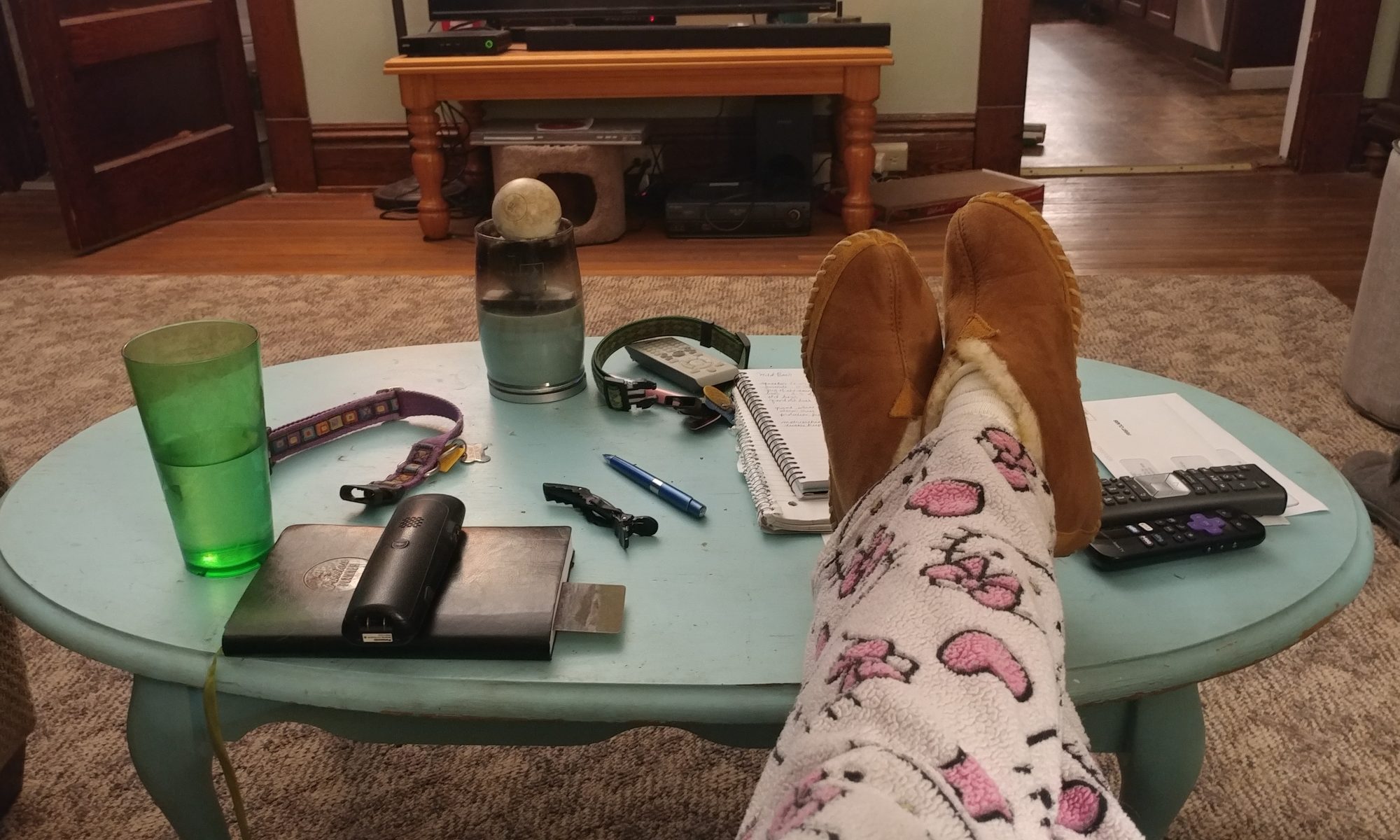 We tidied up our house yesterday. It was in desperate need. I used to have a friend who cleaned for me, but the house is so exhausting that she had to break the job into two separate days. It’s not that it’s a huge house or anything. It’s just that, in 1908, people liked each room to have about 12 corners, and each window has 8 separate surfaces to clean, and they had to have two staircases instead of just one. And then modern Roberts came along and filled said house with creatures that drop hair in a daily mammalian monsoon and added two kids with more toys than anyone needs. It’s a bit much for one person, and that’s why I’m now without a cleaning person. Plus, I decided that money would serve me better in a jar for Ben’s future legal fees.

During yesterday’s miserable exercise–one replete with whining and bickering and arguments about who was absolutely not going to pick up that shoe or hang up that coat–I noticed something.

Now, maybe this is human nature. I haven’t been in many of your homes, but I can’t be alone in this. Isn’t it natural to seek out a flat space and cover it with your crap? As I write this, my butt is on the couch and my feet are on the coffee table. Also on the coffee table are two notebooks, a day planner, two bills, three remotes, a phone, a glass of water, a dog collar, a pen, a hair clip, another dog collar, a candle, and two lacrosse balls (which I use to work on the knots in my shoulders, and yes, it hurts like a mofo). And this is after we cleaned it all up. This is what’s left. 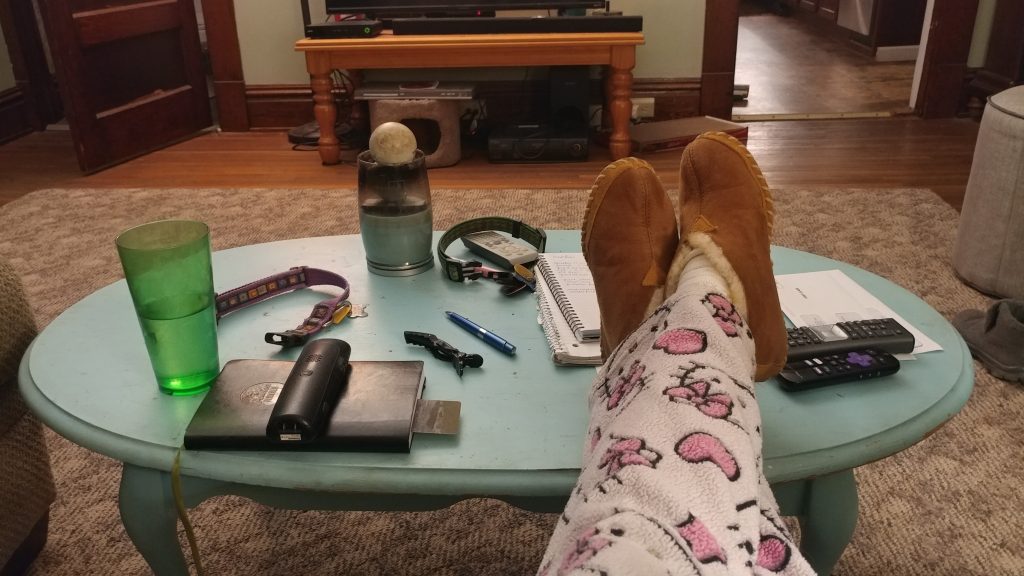 For me, for us, that’s not bad at all. I could walk around the house and photograph myriad flat surfaces that have far more stuff on them than this coffee table.  The problem with having a flat surface in your house is that a flat surface was made for exactly one purpose: putting stuff on it. That’s it. That’s why we have furniture with flat tops. The table is for dishes and food. Counter tops are for appliances and cat feet at 2AM. The desk–always the worst of the offenders–is like a wide valley where creatures such as first drafts, water bills, paper clips, photographs, and lip balm come to graze and play and roam about on the expansive, composite-wood savannah. The desk is a place for piles if ever there were one. And when the desk’s real estate is maxed out, I move on to the top of the printer, and the top of the filing cabinet, and the top of the fireplace (which is always a fantastic place to put paper products).

These flat surfaces enslave us. At the end of my bed, I have a lovely wicker trunk that was a wedding gift. In it, I store out of season blankets and other sets of sheets. (As I write this I find myself asking why I really need more than one extra set of sheets. After all, I’ve got one set on the bed and a second set for when a kid comes in at 3am and barfs all over everything. Two should be enough. But, no, I’ve got to overdo it. I’ve got my flannel sheets with the doggy paw prints and my flannel sheets that are white so I can bleach them, and I’ve got my two sets of t-shirt sheets and my three sets of cotton sheets–one is pilly but I’m not ready to give up on it–and I’ve got my microfiber sheets that I always think I’m going to love until I put them on the bed and realize the fitted sheet has too much material, and it bunches up under my back and butt at night and reminds me of sleeping on the beach, which is truly a terrible place to sleep, if you’ve ever tried it, and there are sand fleas, too. But this isn’t a post about excess or sand fleas; it’s a post about flat surfaces. )

The wicker trunk has a magnetic hold on me. It’s one of my favorite pieces of furniture. It’s well-crafted, it’s summery, it smells nice on the inside, and it’s useful. And it’s so bad for me. If 365 days make up a year, only on 10 of those days does the top of that trunk see the daylight. Sometimes it’s laundry baskets, but mostly it’s just clean clothing I haven’t put away yet, random socks, and, if the picture to the left is any indication, a copy of The Catcher In the Rye.* When I clear it off, I’m always so certain that I’ll change my ways and keep it clear and zen. I’m suddenly quite sure that the bedroom should be a peaceful place, a feng shui masterpiece, if possible, and I vow to keep it thusly. And then, the next day, the wicker surface is lost again under a fresh load of Scooby Doo underwear and a turquoise pair of deer leggings.

You know what’s worse than flat surfaces? Catch-all pieces of furniture. Usually, these are chairs. I’ve observed that there is a certain radius around an entryway and if a piece of furniture is placed within that radius, it will become a catch-all. Now, my radius may be wider or more narrow than yours, but there is still a radius, and if there’s a chair within that area, we’re screwed. There’s a recliner about ten feet from our lower back door. You’d think that would be far enough away, but nope. The Roberts radius clearly exceeds ten feet because we hadn’t seen the cushion of that chair for three months. When we finally decided to deal with the evil pit, we found two seasons of coats in there, a pile of Ben’s homework, my belt, a dog leash, a set of sheets, and my long-lost bathmats. (In this case, the recliner is also within the radius of the laundry machines, but that’s a problem I’m not ready to admit I have, yet.) By the time I found the bottom of the recliner, I knew that it had to go. Anywhere. Upstairs to the living room, perhaps, beyond the radius of either the front or the upper back door. Because that’s the danger zone. And the front door already has its own chair, currently piled with the contents of a future attic run: a decorative ghost, a grinning, styrofoam pumpkin head, and a gardening trowel. Well, that last one goes to the tool shed when I decide to take out the deflated inner tubes.

You know what’s worse than a chair? A papasan chair. They are the devil incarnate. Whoever invented the papasan chair should be gibbeted. It’s literally a giant bowl that sits in your house like a Venus Fly Trap and waits for a flannel shirt or a hand towel to buzz into its gaping maw. The papasan chair doesn’t care what it eats; it will consume literally anything. It’s a black hole, a tiger shark. Pick your metaphor. Headphones, backpacks, drowsy felines…it doesn’t give a crap. It just wants your stuff. It’s the Pied Piper of Papasan. It plays a mystical flute that we can’t hear, but the stuff can hear it, and the stuff comes right out of the closets and dances merrily into the gullet of that tipsy rattan demon. That’s how the stuff gets there.

Plus, it’s bewitched us: we throw something in it every time we walk by. An offering on the Altar of the Unkempt. Thank god we’re finally waking up and realizing we’re cult members in this Papasan Slob Society. The chair must go to the attic. Formerly, it was a demon foyer-bowl. Before that, it was a demon basement-bowl. Now it’s a demon living room-bowl, and I have to exorcise it, no matter how much pea soup it spews on my shirt. I’m going to need an old priest and a young priest.

I’m not an organized person. Moreover, there are a million better things to do in this world than sort socks and papers and the works of reclusive American novelists. That’s the thing, here. I’m not writing myself into some great revelation about newfound tidiness. I know I won’t change, ever. We all have to sort socks, sometimes, but I’ll trade that in a heartbeat for 20 minutes of sunshine, or fresh air, or even a productive writing hour. Take a solid nap. Sing to the dog. To put it in the simplest, most adolescent terms, I just don’t want to sort my damn socks. So the piles accrue around me.

I know you tidy people are out there. You’re probably reading this on your wide open desk, next to your bare end table, shaking your head because you just can’t understand what’s so hard about taking 10 seconds to hang up your Gap jeans rather than tossing them on the ficus tree, and how can there be one ankle boot in the second-floor bathroom and one in the basement boot box because who does that? All I can say is that you must be a powerful Jedi to resist the siren song of the stuff-pile. I’d ask you to teach me your ways, but I’m pretty sure the Dark Side claimed me long ago.

*That’s the thing about trunks. They’re goddamn useful. Old Ben likes to use it as a diving board for the bed. Boy, I sure do need to work on my cleaning habits. I really do.