I’m not really sure how one eats crow in a public forum when one has gone to such great lengths to denigrate and castigate an entire species.

A few months ago, I composed a blog about my distaste for the impending arrival of Brood V of the periodical cicadas. I said I wished to will them out of existence, to wreak an entomological genocide and wipe their presence from the face of the West Virginia hills. Or something like that. I was all up in arms about the Biblical swarm to come and dropped several unladylike f-bombs as I railed against the cicadas.

And now, with tail tucked firmly between legs, I offer up a sincere apology. Cicadas, please, hop onto my knotted rope so that I may flagellate myself a little harder. I deserve it. Because I think you’re so damn neat. 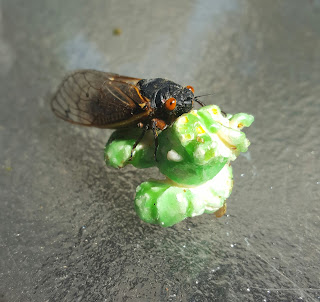 As their emergence neared, I grew ever more nervous. Ben and I watched the nymphs closely as they meandered in their tunnels under the pavers. The weather warmed; the weather cooled. Just when I thought they might appear, they didn’t. It’s like when you’re in the dentist’s chair waiting for a root canal and you hear the dentist approach and then retreat and you sort of want him to get his ass in there and get it over with and you sort of want him to fall down a mine shaft.

Anyway, I was anxious. The nymphs grew larger, and they built cicada chimneys from which they would eventually emerge. They did this a month ahead of time, proving that periodical cicadas are nothing if not neurotic over-planners.

I think that’s when I started to crack. Boom: there was my commonality. We’re both Type A, obsessive creatures who pack our bags a month ahead of time and have an eye on our escape root the moment we enter a building. 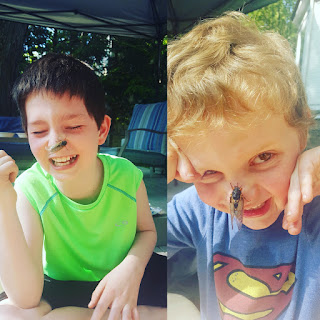 When I caught the boys stomping nymphs and crushing them with bricks, I was appalled. I told them that the little buggars had waited 17 years for this chance and that I wouldn’t stand for cicada cruelty, pain receptors or not. (They’re arthropods, after all, and so are lobsters, and don’t you tell me that lobster isn’t screaming to get out of that pot when you boil him up.) Suddenly, it seemed so unfair to have to work for 17 years for a chance at life only to meet your grisly end under the weight of a tiny Star Wars Croc. (All the more undignified a death should it prove to be a shoe that lights up.) 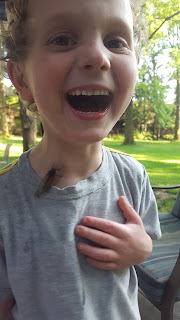 And then I saw that cicada video I put in the previous blog. It’s a genius piece of artwork, with the violins and all. Somehow an insect swarm, when put to piano and moody lighting, loses the ick-factor and becomes a moving and powerful example of the miracles in nature, of evolution. When they got to the individuals with the deformed wings, I was teary. When they all died, I was inconsolable. In fact, I dare anyone to watch that video and not be moved.

Cicadas, I love you guys.