I went to the lake yesterday. I wish I could say that with more enthusiasm. Actually, since this is type you have no idea how much enthusiasm might be going into my typing; my fingers could literally be bouncing off the keys with zest and verve. However, the distinct absence of exclamation points should clue you in.

As an aside: I hate exclamation points. I have a friend from childhood who peppers her writing–she’s not a writer, but in emails and letters and posts–with exclamation points. Everything deserves one! She’s always terribly excited to tell you that she picked up some new shoelaces and a head of cabbage! Things are looking up!!! And the more exclamation points she includes, the more vividly I envision myself beating her senseless with her own keyboard. Er, with her own fucking keyboard!!!!!!!!

Anyway, weekday lake trips buoyed this blog into existence during my second semester of graduate school. (I still cannot believe I’m writing about it in the past tense, now.) I went out there in the snow, and in the frost, and eventually, in the warmth and sunshine. I hiked and sat and wrote and ice-walked and kayaked. It was great. But in all that time, I never once went to the lake in the rain.

Now wait a minute, you say. The rain isn’t a bad thing to a nature-lover. The world feels different in the rain. It’s quiet and wonderfully solitary. Provided you have the right clothing, a hike in the rain can introduce you to things you won’t ordinarily see. The forest smells peatier; tiny creeks form, giving you hints of where ravines will someday turn into foothills and gulches. (Gulch is far and away my favorite word in the English language. I’m going to name my next cat Gulch.) The rain reveals a little-seen world in the woods if you’ve packed the right shoes. And even if you haven’t, as the cantankerous bag-lady at Kroger once sniped at me when I frowned at a downpour, “You’re not made of sugar; you won’t melt.”

You know, I’d really like to stick that bitch in the mouth. I had a pie with me. Meringue.

But for whatever reason, Piedmont Lake has never been a place I want to be in the rain. I’m ashamed to say that it has something to do with the fact that I’m unplugged out there. Even with the world’s biggest pile of books, I sometimes need to feel connected. Now, not often. I usually go to Piedmont to get away. But when it rains, I’m forced into the house, and when I’m forced into the house, I’m also forced into sitting with myself in the silence. And myself and I have trouble when it’s just the two (one) of us. We start thinking about the rejection email we got from McSweeney’s (again), and the fact that we just spent $40k on a degree that offers rejection emails rather than paychecks. And then we decide to open the fridge and dig out last summer’s s’mores kit, which by now is just a bag of sugar-rocks and broken graham crackers that taste like freon. And we gnaw on them and gag at the taste and our self-pity, and I tell myself I can’t stand her presence because she brings me down.

On a dismal day, Piedmont Lake throws off nothing but gray and self-pity. And I hate self-pity. It’s an unattractive quality and a bad habit. Today, though, I just couldn’t shake it.

I went out to clean the cabin in preparation for the summer season and tackled the filthy beast until every dead millipede and every live roach (especially the one I found skulking under my pillow) had been swept away. The dogs waited as patiently as they possibly could for me to finish so they could trot down to the lake, where the scene was quite dreary. As there was no wind, the rain fell straight down onto a mirrored surface. One miserable fisherman puttered along the shoreline past the dock, and I wondered if he felt as cranky as I did. The fish rarely bite in the rain.

To my surprise, Nugget and Maya reacted with an initial lack of enthusiasm too. The one thing I’ve learned from 37 years of owning dogs is that they like the rain about as much as I do. They’ll allow their bladders to fill to the point of rupture before they’ll pee in a heavy downpour, and if she can sneak away from the humans, Nugget will happily leave a steamy pile in the foyer rather than get her girly paws wet. Down by the lake, both girls picked their way through the long grass, which was overdue for a mow, and looked about as happy as I felt.

But of course, dogs impart teachable moments to us wherever they go, if we’re receptive. When you’re a dog, something always comes along to perk you up. Rather than mope and pity themselves, they keep their noses to the ground, always seeking treasure, ever-confident that it will appear. Dogs’ opportunistic nature should be a lesson to all of us; something great lies just around the bend at any given time. For my girls, something great did indeed lie around the bend. Something great and dead and decomposing.

What can we learn from the dog?

First and foremost, we too must keep our noses to the ground so we don’t miss whatever wonderful, smelly, desiccated corpse happens to be lying on the shore of the lake. And when we find it, we should roll in it with abandon, digging our shoulders into the acrid, rotting scales because these rare jewels come along infrequently in life. 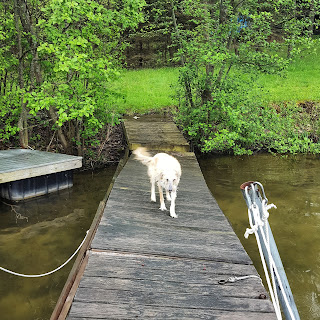 Follow me through the guts of this metaphor, if you will.

Yes, I’m telling you to roll in the dead fish like a dog. Carpe carpem: seize the fish. Roll until the stink of joy covers you, because that joy, that stink, is fleeting, and all too soon some higher power will come along and lure you out onto the end of the dock and throw you into the lake.

Poor Nugget never saw it coming. She was so happy to reek and so stunned when I tossed her in the drink. Yet, like any dog, she bore me no ill will and came right back onto the dock with a sodden, wagging tail, never once imagining that I might do it again. I didn’t. And while I apologized to her, and wrung out her dripping beard, Maya found the fish and plucked it from the wet grass in her jaws, carrying both it and her tail high. A most precious treasure.

I admit I didn’t see it this way at the time. Possibly, I yelled, “Oh my gawd put that down you dirty dog!” Possibly, I ended the excursion and went back inside, wet and resentful and appalled. Possibly, I’m now only realizing that I stripped them of their beloved prize in a predictably human way.

I mean, it was a rotting carp. The girls stunk. And I despise the lemons-into-lemonade cliche. But, perhaps we should all look for the dead fish on dreary days. Otherwise, it’s just a soggy walk in the rain.